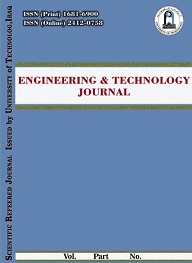 Engineering and Technology Journal is a global, scientific and Open Access journal. Publishing under the license of Creative Commons Attribution 4.0 International (CC-BY), this journal is published monthly by the University of Technology (UOT), Iraq, since 1977 (printed version) and since 2005 (online version). ETJ publishes original articles and review papers in the fields of engineering and science. The journal uses a double-blind peer-reviewing system to assure the quality of the publication. The Turnitin service is used to prevent plagiarism and to ensure the...
Read More ... 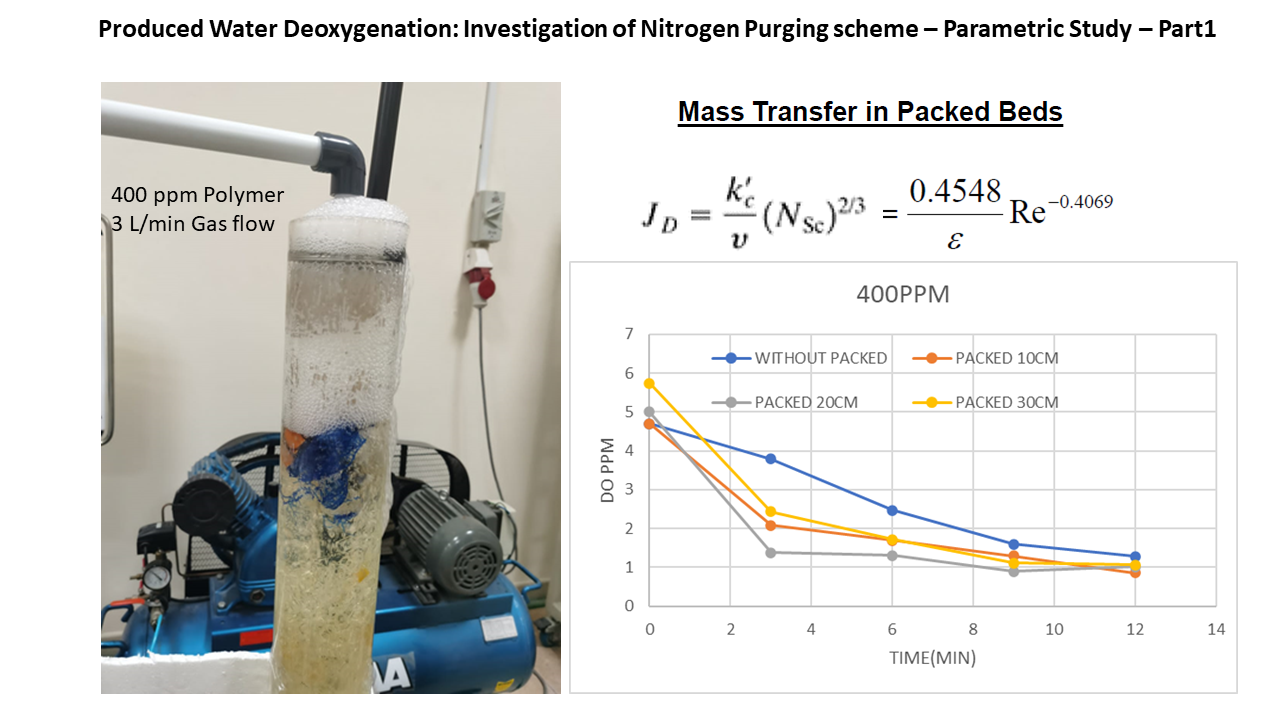 Produced water (PW) is water that comes out of the well with the crude oil during crude oil production. The quality of produced water varies significantly based on the geochemistry of the producing formation, the type of hydrocarbon produced, and the characteristics of the producing well. A well-known obstacle hindering the re-use of the produced water, in different sectors, is the high content of dissolved oxygen (DO) as it can cause corrosion and polymer degradation. In this study, we report the experimental investigations for de-oxygenating samples of PW collected from Omani oil fields via a gas lift unpacked and packed column. Two types of packing (polyethylene rushing rings and spherical glass balls) were used. Upon treating the PW samples grafted with different concentration of polyacrylamide; 100-500 ppm, through different purging techniques at various N2 throughputs, a considerable reduction in the content of the dissolved oxygen (from saturation level to less than 1 ppm) was detected in the first duration (3 minutes). Upon examining purging durations up to 300 minutes, the DO removal efficiency was slightly improved; however, residues of DO (approaching 0.5 ppm) was left unremoved which indicates the necessity for elaborating another approach for treating the shallow DO levels. 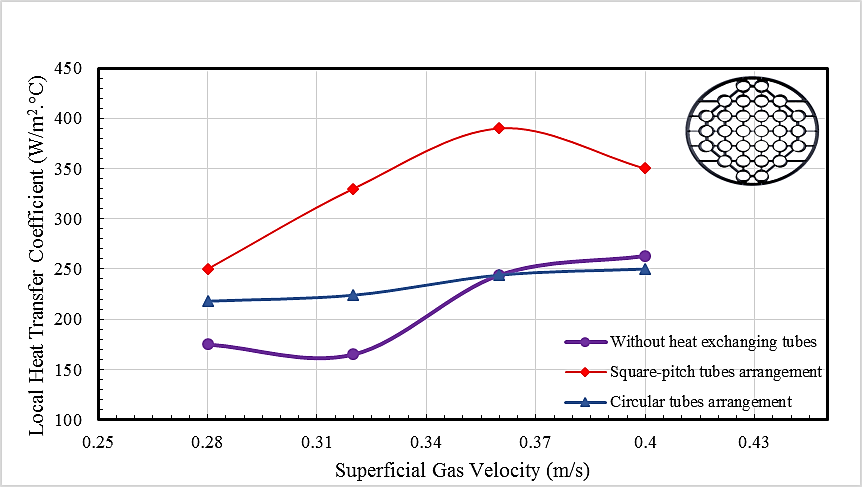 A fluidized bed reactor is commonly used for highly exothermic reactions for different chemical industrial processes. However, inefficient removal of the generated heat due to the exothermic reaction can seriously influence reactor performance. Hence, quantifying and understanding the heat transfer phenomena in this reactor is essential to enhance the performance of the reactor and consequently the chemical process. To achieve a better quantification and understanding of the heat transport in this reactor, an advanced heat transfer technique has been used in this study to quantify the impact of the presence of the cooling tubes on the local heat transfer coefficient under different operating conditions for this reactor. It has been found that the local heat transfer coefficient in the fluidized bed reactor equipped with a bundle of vertical tubes increases significantly as superficial gas velocity increases at the wall region, while different behavior was noticed at the center of the reactor. Moreover, the results show that the local heat transfer significantly decreases at the reactor's core region for all studied superficial gas velocities. Furthermore, the new tube arrangement offers a uniform local heat transfer profile for all studied operating conditions. The obtained new high-quality experimental data for the local heat transfer coefficient in a fluidized bed reactor equipped with a bundle of tubes can be used for validation CFD simulations or mathematical models, facilitating the design, scale up, and operation of this reactor.

Use of TiO2 in Photocatalysis for Air Purification and Wastewater Treatment: A Review

This study reviews recent research on the synthesis and application of titanium dioxide (TiO2)-based photocatalysts for environmental applications. The principles of non-homogenous photo-catalysis include utilizing a solid semiconductor, such as titanium dioxide Nano or macro, to form a stable suspension (heterogeneous phase) at the impact of irradiation to elevate a reaction at the surface interface of the different phases in the system. Recently, titanium dioxide has been considered the better semiconductor in non-homogenous photoinduced treatment. TiO2-based photocatalysts have broad applications for industrial processes because of their exceptional physicochemical properties. Nevertheless, having a narrow band near the ultraviolet region limits its applications within visible radiation. As a result of this, there have been considerable research efforts to improve the visible light tendency of TiO2 through modifications of its optical and electronic properties. Several strategies, such as coupling TiO2 tightly and incorporating other metallic components during synthesis, have increased the bandgap of TiO2 for visible light applications. Moreover, an overview of nanotechnology that could enhance the properties of TiO2-based catalysts in an environmentally friendly way to decompose pollutants is also presented. The various TiO2-based photocatalysts have wide applications in degrading recalcitrant pollutants in the air, water, and wastewater treatment under visible light. 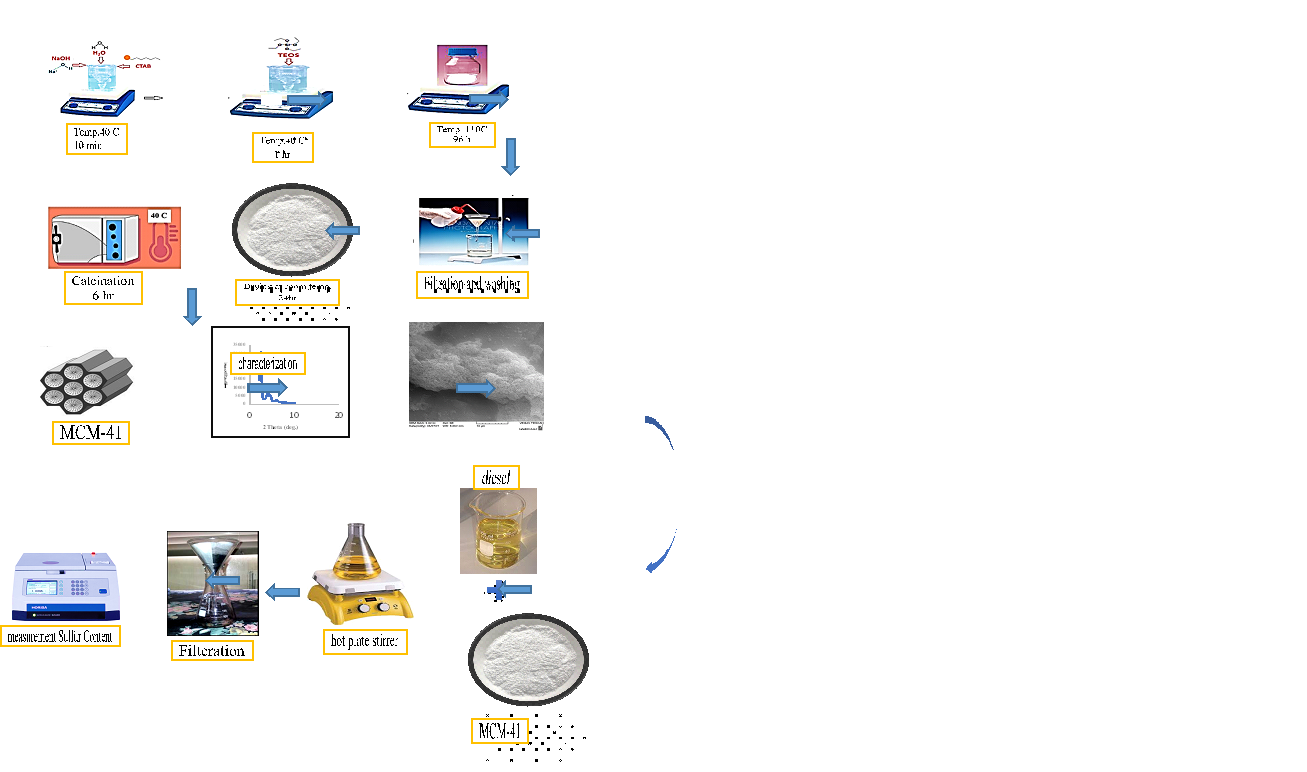 In the current work, sulfur was removed from actual diesel fuel containing 1.2 wt.% sulfur from the Al-Dura Oil Refinery (Iraq), which was studied using adsorption desulfurization with the spherical mesoporous silica MCM-41. This study investigated the effects of different operating conditions, including the dose of MCM-41 (0.04-0.2 gm), time (60-180 min), and temperature (30-70°C). The optimal working conditions were determined to be 0.4 gm MCM-41, 180 min, and 70°C. After exploring the isotherm models of Langmuir, Freundlich, and Temkin, Temkin models with a correlation coefficient (R2 = 0.9996) were selected to best represent the stable data. The kinetics of sulfur components on MCM-41 were studied using pseudo-first-order and pseudo-second-order kinetic models and intra-particle diffusion. A pseudo-first-order adsorption kinetic model with a correlation coefficient (R2) of 0.9867 can accurately represent the adsorption process. Gibbs free energy (ΔGo), enthalpy (ΔHo), and entropy (ΔSo) were calculated as thermodynamic parameters. The adsorption of total sulfur-containing compounds onto mesoporous silica was spontaneous, endothermic, and increased the irregularity of the sulfur compounds on the surface of the adsorbent. The total sulfur content of actual diesel fuel was reduced from 1.2% to 0.84%, corresponding to a desulfurization efficiency of 29.72%. Consequently, the findings of this study might be used as a starting point for future research. 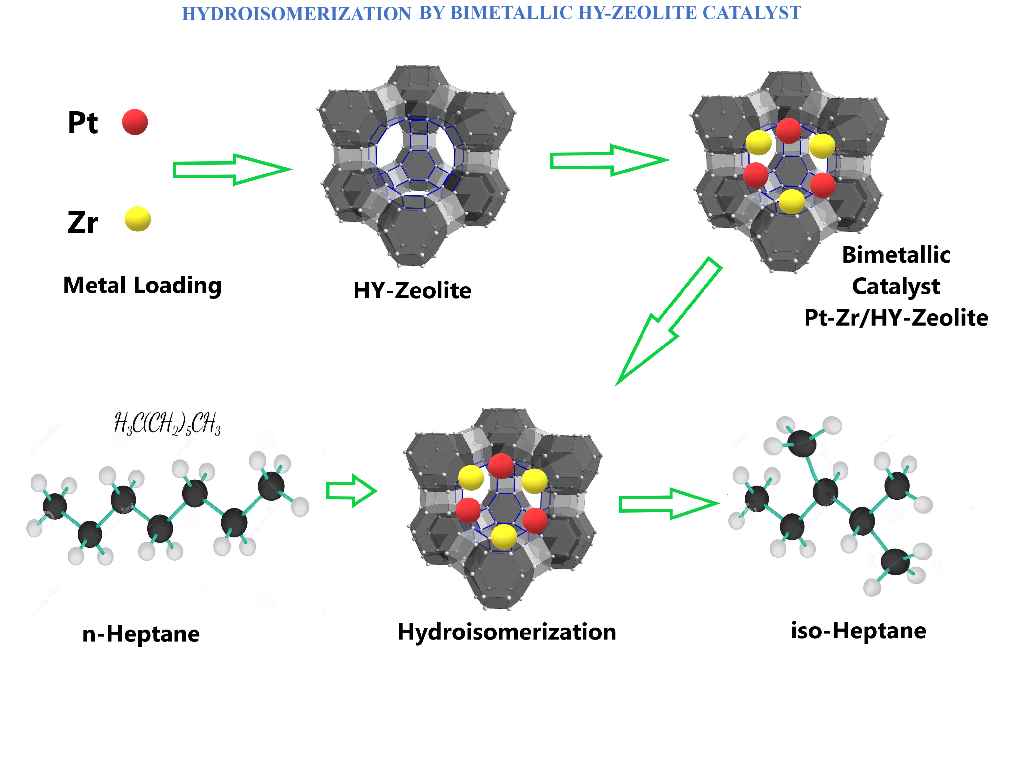 The synthesis of NaY-zeolite was performed hydrothermally. The preparation of the bifunctional catalysts was achieved by loading NH4Y-zeolite with a cheap Zr metal, as a second loading metal, with tiny amounts of Pt to compose a Pt-Zr/Y-zeolite catalyst. Different characterization methods (i.e., XRD, SEM, EDX, BET, and AFM) were used to investigate the catalyst properties. The catalytic performance was studied by performing the hydroisomerization of n-heptane in a gas phase at a temperature of 275°C and atmospheric pressure in a fixed-bed reactor. The GC-FID results of the products confirmed the positive role of Zr in enhancing the catalytic features, as reflected by the increase in the isomerized products and the decrease in the unwanted by-products. Incorporating 1.0wt%Zr with 1.0wt% of Pt significantly improved the activity and selectivity and increased the yield of branched alkanes. This was achieved because the addition of zirconium provided an extraordinary Lewis acidity to the zeolite-framework structure and simultaneously took advantage of the electronic and catalytic properties of Zr and Pt metals to enhance its novel catalytic features. This reduced the amount of Pt metal and halved the cost of the catalyst. In addition, the bimetallic catalyst (HY-zeolite loaded with 1wt%Pt & 1wt%Zr) achieved values of 74.2, 78.8, and 58.5mol% for conversion, selectivity, and yield, respectively. The conversion was improved to a level close to 2wt% Pt/HY-zeolite catalyst, while selectivity was not significantly decreased from that of 2wt% Zr/HY-zeolite catalyst, reaching a yield level of isomers close to that of 2wt% Pt/HY-zeolite catalysts.

2021-12-30
Winner announcement date: 03 January 2023 Dear Colleagues, We are pleased to announce the “ 2022 Most Cited Paper Awards” for research and review articles published in Engineering and Technology ...