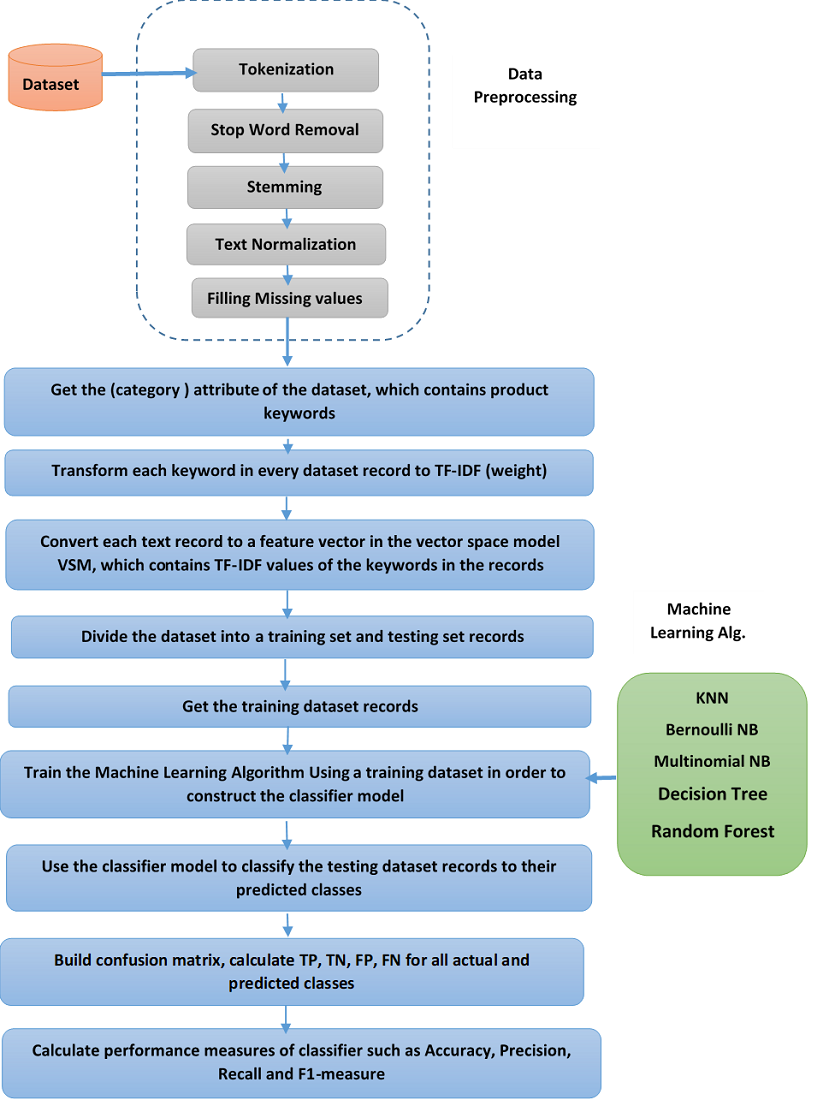 Text classification has been a significant domain of study and research because of the increased volume of text datasets and documents available in digital format. Text classification is one of the major approaches used to arrange digital information via automatically allocating text dataset records or documents into predetermined classes depending on their contents. This paper proposes a technique that implements supervised machine learning algorithms such as KNN, Decision tree, Random Forest, Bernoulli Naive Bayes, and Multinomial Naive Bayes classifiers to classify a dataset into distinct classes. The proposed technique combines the above-mentioned machine learning classifiers with the TF-IDF feature extraction method as a vector space model to achieve more precise classification results. The proposed technique yields high accuracy, precision, recall, and f1-measure metric values for all the implemented classifiers. After comparing the obtained results of different classifiers, it is found that the Random Forest classifier is the best algorithm used to classify the textual dataset records with the highest accuracy value of 0.9995930.

Recent advances in computer vision have allowed wide-ranging applications in every area of life. One such area of application is the classification of fresh products, but the classification of fruits and vegetables has proven to be a complex problem and needs further development. In recent years, various machine learning techniques have been exploited with many methods of describing the different features of fruit and vegetable classification in many real-life applications. Classification of fruits and vegetables presents significant challenges due to similarities between layers and irregular characteristics within the class.Hence , in this work, three feature extractor/ descriptor which are local binary pattern (LBP), gray level co-occurrence matrix (GLCM) and, histogram of oriented gradient(HoG) has been proposed to extract fruite features , the extracted features have been saved in three feature vectors , then desicion tree classifier has been proposed to classify the fruit types. fruits 360 datasets is used in this work, where 70% of the dataset were used in the training phase while 30% of it used in the testing phase. The three proposed feature extruction methods plus the tree classifier have been used to classifying fruits 360 images, results show that the the three feature extraction methods give a promising results , while the HoG method yielded a poerfull results in which the accuracy obtained is 96%.

Today in the business world, significant loss can happen when the borrowers ignore paying their loans. Convenient credit-risk management represents a necessity for lending institutions. In most times, some persons prefer to late their monthly payments, otherwise, they may face difficulties in the loan payment process to the financial institution. Mainly, most fiscal organizations are considered managed and refined client classification systems, scanning a valid client from invalid ones. This paper produces the data mining idea, specifically the classification technique of data mining and builds a system of data mining process structure. The credit scoring problem will be applied using the Taiwan bank dataset. Besides that, three classification methods are adopted, Naïve Bayesian, Decision Tree (C5.0), and Artificial Neural Network. These classifiers are implemented in the WEKA machine learning application. The results show that the C5.0 algorithm is the best among them, it achieves 0.93 accuracy rates, 0.94 detection rates, 0.96 precision rates, and 0.95 F-Measure which is higher than Naïve Bayesian and Artificial Neural Network; also, the False Positive Rate in C5.0 algorithm achieves 0.1 which is less than Artificial Neural Network and Naïve Bayesian

The aim of this paper is to improve a disease diagnosing system through classifying the skin diseases depending on the skin images of many patients by using the multiwavelet transformation. First, extract features from multiwavelet coefficients. Second, the skin images are classified as Warts, Vitiligo, Hemangioma, and Normal depending on the decision rules generated by the decision tree using the ID3 learning algorithm.