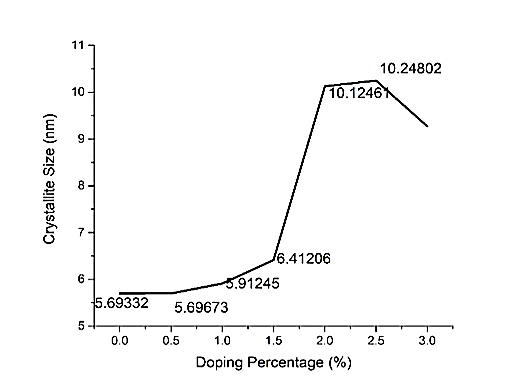 The structural characterization was discussed in the present paper of the pure MgO nanoparticles and the doped (Mg(1-x)pbxO) nanoparticles specimens, where (0 ≤ x ≤ 0.03). The modified Pechini method was used to prepare all the specimens. From (DTA), the convenient temperature of decomposition from Mg(OH)2 to MgO was above 375°C. The structure investigation (XRD) revealed that all the specimens have identical space groups and index well to cubic structures. The obtained crystallite size by Scherrer''s equation was increased with increasing the fraction of doping except for (Mg0.97Pb0.03O) due to the formation of PbO oxide. The molecular vibration by FTIR demonstrated that all the pure and doped specimens have the same framework. As the incorporation of Pb2+ ions increases, the bands get broader, and the intensities increase in the ranging 800-400 cm-1 due to vibrations of O-Mg and O-Pb bands, respectively.

The present work aims to study physical tests such as the water absorption tests of PVA; PVA/corn starch blends at different mass percent (25, 30, 35, 40, and 50%) of corn starch after immersion in distilled water for ten minutes. The blends were also characterized by FTIR analysis, and an optical microscope. Casting method used to prepare samples. The results of water absorption exhibited that the weight losses of the sample increases the starch content rises in the PVA matrix. Also, it was found the highest value of the swelling ratio % at (50% PVA /50% Starch) blend, while minimum values of the swelling ratio % at (75%PVA /25%Starch) blend and pure PVA film.
It was observed from optical microscope that the starch granules disperse well at 25 and 30 wt.% of the starch in the blend films. Nevertheless, clustering could be observed in the polymer blend at 35, 40, and 50 wt.% of starch component. It was shown that porous and spherical voids after the samples were immersed in distilled water.

A ZnS nanoparticle was prepared using hydrothermal interaction of zinc acetate with Thiourea in different reaction temperatures (170oC, 180oC, 185oC, 190oC). The structural characterization of synthesized nanoparticle was determined by X-ray diffraction (XRD) which showed a hexagonal structural of ZnS. Scanning electron microscopy (SEM) and energy dispersive spectrum (EDS) analysis were confirmed that the morphology and elemental analysis was formed ZnS nanoparticle. Absorption study has been carried out using UV-VIS spectrophotometer to determine the band gap of ZnS nanoparticle. The optical energy band gap was changed at values equal to (4.16, 4.46, 4.1 and 4.35eV) with different hydrothermal temperatures at (170oC, 180oC, 185oC and 190oC) respectively. However, these values of energy gaps for ZnS nanoparticles are blue shift and larger than that bulk value due to quantum confinement. Fourier Transform Infrared Spectra (FTIR) is recorded in an FTIR spectrometer to verify the presence of ZnS powder. The particle size of ZnS calculated was ranged between 3.5 to 3.9 nm according to Sherrer's equation and the results were compatible when using Effective Mass Approximation (EMA).

In this paper; nanostructure porous silicon (PS) was prepared by using photo-electrochemical etching (PECE) of n-type silicon at 10 & 30 mA/cm2 etching current density for 10 minute. X-ray diffraction (XRD) confirms the formation of porous silicon and the crystal size is reduced toward nanometric scale. The Atomic Force Microscope (AFM) investigation shows the sponge like structure of PS, the width of surface pits and surface roughness increase with etching current density.Finally, the Fourier Transform Infrared (FTIR) illustrates the PS layer have large amount of dangling bonds.

In this paper preparation of good quality transparent conductive ZnO thin films by post-oxidation of vacuum evaporated Zn, on glass and silicon (p-type) as substrates, the oxidation was achieved in a short time (90 sec) which is known as rapid thermal oxidation. One growth parameter has been considered to specify the optimum conditions the film thickness are (200,300,400 &500 nm).
The XRD spectra revealed a high oriented grain in the (002) lattice system which is hexagonal wurtzite and proved that the ZnO films have a polycrystalline structure. Also, the morphological properties of ZnO films show that all films have a homogeneous surface morphology and it appears, to change significantly as a function of thickness.The energy gap of ZnO films decreases as the thickness increases. The FTIR spectra indicate the existence of the distinct characteristic absorption peak at 472.56cm-1 for Zn-O stretching mode.
Study of effect I-V and C-V measurements of ZnO films with the increase thickness. The photovoltaic properties confirmed that the photovoltaic depends strongly on the bias voltage and the amount of current produced by a photovoltaic device which is directly related to the number of photons absorbed. C-V results demonstrated that the fabricated heterojunction is of abrupt type. Also, the width of the depletion layer (w) follows the same behavior (V_bi ) decreased while the charge carrier density (N_d ) was increased with the thickness increase.

Effect of Some Vegetables (Carrots, Onion, Parsley, and Red radish) on Corrosion Behavior of Amalgam Dental Filling in Artificial Saliva

This work involves study corrosion behavior of amalgam in presence of some vegetables including (Carrots, Onion, Parsley, and Red radish) which were chosen because they require mastication process by teeth and taking enough time that make them in a contact with amalgams filling in artificial saliva.
The corrosion parameters were interpreted in artificial saliva at pH (5.1) and (37±1oC) by adding (50 ml/l) of vegetable juice to artificial saliva, which involve corrosion potential (Ecorr), corrosion current density (icorr), Cathodic and anodic Tafel slopes (bc & ba ) and polarization resistance, the results of (Ecorr) and (icorr) indicate that the medium of saliva and (50 ml/l) onion is more corrosive than the other media. Cathodic and anodic tafel slopes were used to calculate the polarization resistance (Rp) to know which medium more effective on amalgam of dental filling, this study shows that the increasing in polarization resistance through the decreasing in corrosion rate values, the results of (Rp) take the sequence:
Rp:( saliva+ parsley) >( saliva+ red radish)> saliva>(saliva+ carrots) >(saliva+ onion).
While corrosion rates (CR ) take the sequence:
CR: (Saliva+Parsley) Keywords

Soot obtained as an effluent from Kademia diesel-power station was recycled and utilized as feedstock for preparation of nano carbon particles. The porosity, surface area analysis featured by BET N2 adsorption, proximate analysis, Fourier Tranform Infrared Spectroscopy (FTIR), X-ray diffraction (XRD), Scanning Electron Microscopy (SEM) were employed for the structural and morphological characterization of the halocarbon formed.
Ultimate analysis of the fuel oil samples indicate that the H/C ratio of nanospheres is less 0.085 which is an indication of crystallization in the nanomaterial formed.
The results obtained from BET analysis had specific surface area increases to 50 m2/g, comparing with 28 m2/g of that the raw soot. SEM results shows a variations in size and shape of nanocarbon particles formed. The FTIR spectrum of soot shows characteristic signals in the range of 400-4000 cm-1 where corresponding to SO4 2- (600 cm-1), NO3 - (850 cm-1), CO3 2- (900 cm-1), SiO4 4- (1050 cm-1), C–OH aromatics (1250 cm-1), NO3 - (1300 cm-1), CO3 2- (1650 and 1720 cm-1), C=CH alkenes (2930 cm-1), and C – OH alcohols (3400 and 3550 cm-1). XRD investigation indicates the presence of large amount of amorphous material in association with nanocarbon at moderately high intensity broad peak; 2θ=23.5140o, where at the low intensity; 2θ=48.6389o indicate of the low quality of nanomaterial presented in the soot.

Silicon (Si) nanopartilces which studied are in the size range (7 – 23 nm) have been synthesized by mechanical milling. The milled powder was etched by HF & CH3COOH acids. The size, structural, and optical characterization of these nanoparticles were determined by X-ray diffraction(XRD),Atomicforce microscopy (AFM),Fourier transform infrared spectroscopy (FTIR) and UV-VIS spectroscopy. The result confirmed that Si isnanoparticles in crystal phase with band gap 3.15eV, due to the effect of quantum confinement. This technique has been shown to have an advantage over other methods of producing nanoparticles because of low cost, small particles size, low agglomeration, narrow size distributions and uniformity of crystal structure and morphology

This work reports the attempts to carry out pulsed laser ablation in liquid (PLAL) for synthesizing colloidal copper oxide nanoparticles (NPs). Copper oxide NPs was synthesized by 7ns Nd:YAG laser ablation of high purity copper target immersed in different solutions; ethanol, acetone, and water. The optical and morphological properties of copper oxide NPs were investigated. It was found that the optical absorbance, energy gap, size, and distribution of copper oxide nanoparticles are dependent on liquid type. Plasmon peak was observed at 550nm for Cu NPs ablated in acetone and methanol liquids, while it was disappeared for those ablated in water. Atomic Force Microscopy (AFM) analysis showed that the average grain size of copper oxide particles ablated in acetone, ethanol, and water were 276 nm, 300, and 360nm, respectively. Fourier Transform Infrared (FTIR) was used to study the vibrational frequencies between the bonds of atoms for a synthesized copper oxide NPs at different liquids. All these results confirm the complete oxidation of ablated copper.

Study of Characteristics of Porous Silicon by Electrochemical Etching

In this work, the nanocrystalline porous silicon layer is prepared by electrochemical etching of p-type silicon wafer. The morphological films characterized have been studied of the by atomic force microscopy, XRD and FTIR spectroscopy.
The atomic force microscopy investigation shows the average diameter pore is increasing with increase of etching time.
The X-ray diffraction investigates of the porous silicon layer is shown the broadening the width of the peak compare with the bulk silicon is directly correlated to the size of the nano-scale. The FTIR spectra for porous silicon are shown that the dominant bonds being Si-H groups.

In this paper, the nanocrystalline porous silicon (PS) films is prepared by electrochemical etching of p-type silicon wafer with different currents density (15 and 30 mA/cm2) and etching times on the formation nano-sized pore array with a dimension of around few hundreds nanometric. The films were characterized by the measurement of XRD, FTIR spectroscopy and atomic force microscopy properties.
We have estimated crystallites size from X-Ray diffraction about nanoscale for porous silicon and Atomic Force microscopy confirms the nanometric size Chemical fictionalization during the electrochemical etching show on surface chemical composition of PS. The etching possesses inhomogeneous microstructures that contain a-Si clusters (Si3–Si–H) dispersed in amorphous silica matrix and (O-SiO,
C-SiO). From the FTIR analyses showed that the Si dangling bonds of the as-prepared PS layer have large amount of Hydrogen to form weak Si–H bonds. The atomic force microscopy investigation shows the rough silicon surface, with increasing etching process (current density and etching time) porous structure nucleates which leads to an increase in the depth and width (diameter) of surface pits. Consequently, the surface roughness also increases.

Changes in the crystalline domains caused by heat treating Mylar films
between Tg to 240 oC have been studied by Fourier Transform Infrared
spectroscopy (FTIR) and X-ray Diffraction (XRD). Prior to glass transition temperature, shrinkage in the film is insignificant, but progresses rather abruptly as melting point is approached bringing the smooth film surface to rather wrinkle.
The absorbance increase in the FTIR spectra is due to the thickened film caused by shrinking rather than the improvement in the crystalline orientation. XRD on the other hand show that heat treatment of the film near melting point only reduces the contribution of the crystalline domains in the direction [100] in favor of other direction namely rather than on the account of loosing order in favor of the amorphous regions.