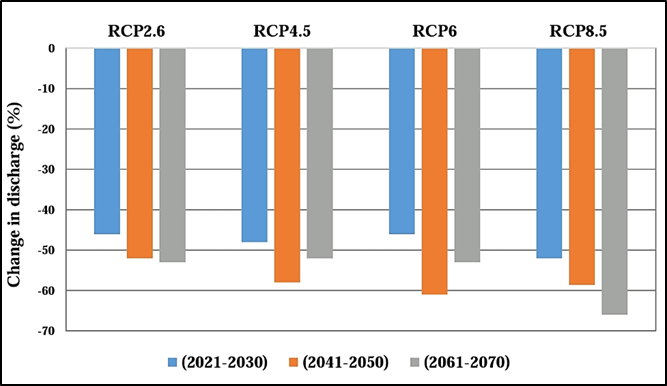 Iraq is one of the Middle East countries that suffer from water scarcity. In addition to the water policy of the upstream riparian countries; rapid population increase, economic growth, and climate changes are the major stressors of water resources available for domestic and agricultural sectors in this country. Therefore, it is of importance to determine the optimal water management methodology. This study aims to identify the optimal water allocation among the domestic, agricultural, and industrial sectors of Baghdad city under present and potential future scenarios. As such, the WEAP model was used to assess and analyze the current and projected balance of water resource management. The model was firstly calibrated and validated using the monthly streamflow data at Sarai station on the Tigris River. Subsequently, the calibrated model was fed with different future scenarios over the period 2020-2040. The employed future scenarios included normal growth population rate (I), high growth population rate (II), halved river discharges (III), combined scenario of the high population with halved water flow (ΙV) and the simulated future water year type scenario (V). Results proved that the WEAP model satisfactorily modeled the water supply/demand in Baghdad with R2 and Pbias of 0.73 and 2.43%, respectively during the validation period. Also, it was found that the water demand and supply were unmet under all proposed future scenarios which implies that there is a swift need for sustainable water management in Iraq and in Baghdad.