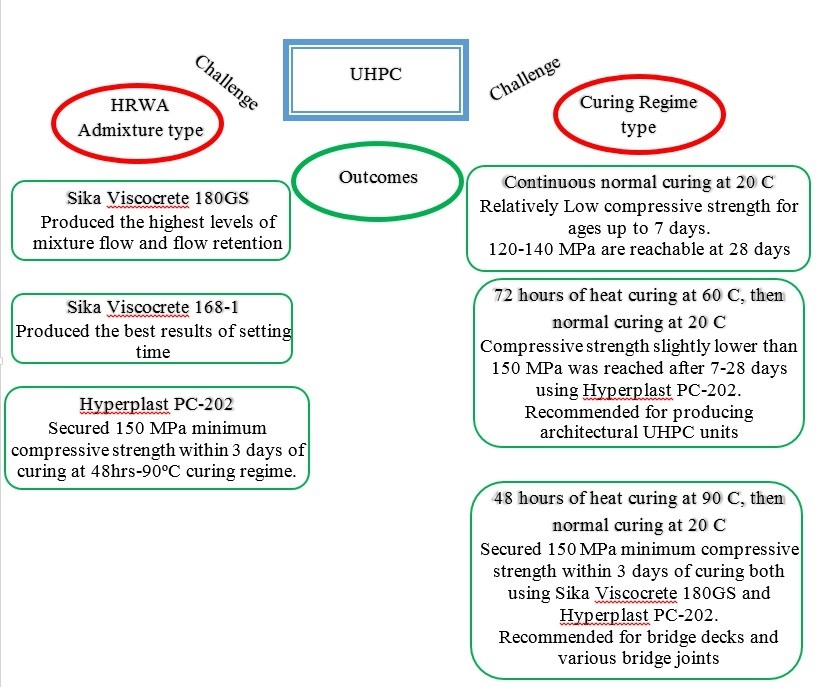 The types of post-setting curing and high range water reducing (HRWR) admixture used in Ultra-High-Performance Concrete (UHPC) mixtures play significant roles in determining their rheological and mechanical properties. This study compares the performance of three types of HRWR admixtures commercially available when added to UHPC mixtures under three different curing regimes. Mixtures made with the different superplasticizers were evaluated for their flow, 45mins flow retention, and setting time as fresh mix properties. Compressive strength was also tested for each mixture after 3, 7, and 28 days of curing at the investigated various curing regimes. Sika Viscocrete 180GS produced the highest mixture flow and flow retention levels with a 241 mm flow and 93.7% flow retention. Sika Viscocrete 168-1 produced the best results of setting time with 3 hours as compared to 12 hours with Sika Viscocrete 180GS. Using Hyperplast PC-202, the required 150 MPa compressive strength was secured as early as 3 days of curing with a 48hrs-90ºC curing regime. Using the same HRWR admixture, compressive strength values slightly lower than 150 MPa were reached after 7-28 days when the 72hrs-60ºC regime was adopted. The last curing regime was recommended for producing architectural UHPC units to minimize the delayed formation of ettringite.

Ultra-High Performance Concrete (UHPC) is a new generation of concrete characterized by its high strength, high durability, and high stiffness. Autogenously shrinkage represents one of the issues of UHPC that occurred at early ages. It occurs particularly during the first 48 hours after casting. This paper focuses on the ways that can be depended on to mitigate the autogenously shrinkage and obtain the outstanding mechanical properties of UHPC. The results showed that the use of coarse sand and high dose of high range water reduced the admixture above 5% of cementations of materials weight, and high ambient temperature at the time of mixing and casting led to increasing the autogenously shrinkage. While using fine sand, silica fume at 25% of cement weight, and crushed ice at 50% of mixing water to control the mixing temperature can reduce autogenously shrinkage significantly.