Convection heat transfer inside an empty triangular channel when filled with porous media heated proportionally with a constant heat flux (1300 W/m²) at the Reynolds number range (3165- 10910) with packed beds has been studied. The present work investigates porous media experimentally. The packed duct has a length (1 m) and (0.1 m) hydraulic diameter packed with porous material made from spherical glass particles of two different diameters (5 mm, and 10 mm). The value of porosity for the channel is (0.468,0.616 and), respectively. This research studies the effect of changing the Reynolds number and porosity on the enhanced heat transfer coefficient and local Nusselt number. The results indicated that using a porous structure enhanced the convection heat transfer coefficient significantly by (90.2%) and (92.1%) at porosity (0.616, 0.468), respectively, when compared with an empty duct. The results also revealed that the local Nusselt number decreased when the flow's axial position increased with increasing air velocity. The pressure on both ends of the test section increased as the air velocity rose and reduced as the size of the glass spheres increased. Therefore, the drag coefficient decreases as the modified Reynolds number increases with the diameter of glass spheres. The current research was compared with previous research, and the results were satisfactory. Correlational relationships were reached between the Nusselt number and the Reynolds number. 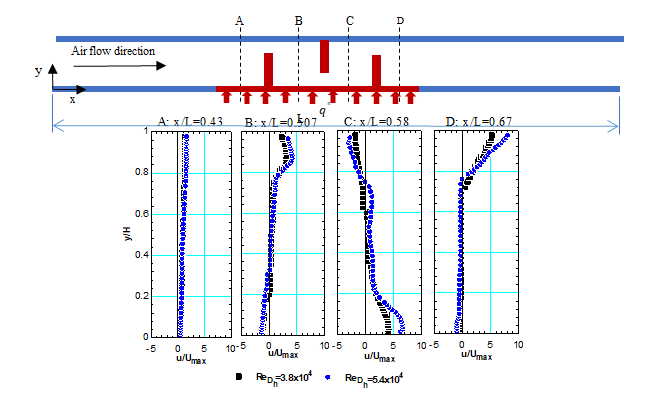 Metal foam is a novel material recently utilized in baffles as an alternative to solid baffles for reducing flow resistance. However, copper foam baffles have been suggested in this research to overcome this issue. So, the experimental tests were carried out in a manufactured square channel (250 mm x 250 mm) and heated uniformly at the bottom wall of the test section.Its walls are mounted copper foam baffles at a fixed porosity of 95%.Baffles were fixed alternatively on the top and bottom of the walls in staggered mode between two successive baffles (center to center) and were kept constant at 250 mm. The experimental work was done for different grades of the pore density of copper foam (10, 15, and 20 pores per inch (PPI)) with a window cut ratio of 25% and a constant heat flux of 4.4 kW/m2.Reynolds number was varied from 3.8x104 to 5.4x104. The data for conventional copper solid baffles were used to compare the effect of foam metal baffles.The obtained results manifested that relative to the solid-copper baffles, the copper foam baffles have a greatly lower friction factor, whereas the friction factor for the solid baffles and copper foam baffles (10, 15, and 20) PPI is about (460), and (20, 29, and 38) times, respectively above the smooth surface. Moreover, the results of previous work predicted the present experimental work very well.

A numerical study has been carried out to investigate the heat transfer by natural convection of nanofluid taking copper as nano particles and the water as based fluid in a three dimensional annulus enclosure filled with porous media between two horizontal concentric cylinders with 12 annular fins of 3mm length and 2.4 mm thickness attached to the inner cylinder under steady state condition and different wall temperature boundary conditions. The governing equations which used are continuity, momentum and energy equations under an assumptions used Darcy law and Boussinesq’s approximation which are transformed to dimensionless equations. The finite difference approach is used to obtain all the computational results using the MATLAB- 7. The parameters affected on the system are modified Rayleigh number (10 ≤Ra*≤ 500), radius ratio Rr (0.293, 0.365 and 0.435) and the volume fraction . The results show that, increasing of fin length decreases the heat transfer rate and for Ra*<100, decreasing Rr cause to decrease Nu and adding Cu nanoparticles with φ= 0.35 cause 27.9% enhancement in heat transfer. A correlation for Nu in terms of Ra, Hf and φ, has been developed for inner hot cylinder.