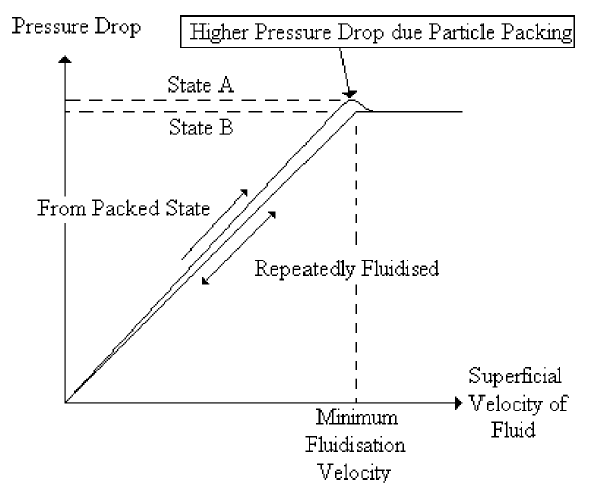 Gas–liquid-solid fluidized beds are broadly utilized in the petrochemical, pharmaceutical, refining, food, biotechnology, and environmental industries. Due to complex phenomena, such as the particle-particle, liquid-particle, particle-bubble interactions, complex hydrodynamics, and heat transfer of three-phase (gas-liquid-solid) fluidized beds, they are incompletely understood. The ability to accurately predict the essential characteristics of the fluidized-bed system, such as hydrodynamics, individual phase mixing, and heat transfer parameters, is necessary for its successful design and operation. This paper investigates the pressure drop, minimum fluidization velocity, phase holdup, heat-transfer coefficient of a fluidized bed reactor, heat transfer studies, CFD simulation, and the effect of these parameters on the extent of fluidization. Many variables (fluid flow rate, particle density and size, fluid inlet, and bed height) affect the fluidizing quality and performance of the fluidization process. The hydrodynamics parameters, mixing of phases, and the behavior of heat transfer with various modes of fluidization were investigated to predict hydrodynamics parameters. Several publications have demonstrated the utility of (CFD) in explaining the hydrodynamics, heat, and mass transfer of fluidized beds. Principles of measurement, details of the experimental configurations, and the applied techniques by various researchers are also presented. Feng's model was statistically validated using experimental data that was both time-averaged and time-dependent. Furthermore, this model successfully predicted the instantaneous flow structures, which should provide strategies for the best design, scale-up, and operation in fluidized bed columns. The divergence between the simulated and observed values can be reduced by better understanding the fluidized bed's nature.

Heat sinks are low cost, the process of manufacturing reliability, and design simplicity which leads to taking into consideration various cutting-edge applications for heat transfer. Like stationary, fuel cells, automotive electronic devices also PV panels cooling and other various applications to improve the heat sinks thermal performance. The aim is to focus on some countless fundamental issues in domains such as; mechanics of fluids and heat transfer, sophisticated prediction for temperature distribution, high heat flux removal, and thermal resistance reduction. The outcome of this survey concluded that the best configuration of heat sinks has a thermal resistance about (0.140 K/W to 0.250 K/W) along with a drop of pressure less than (90.0 KPa) with a temperature gradient about 2 °C/mm. Heat sinks with square pin fins lead to enhance the effectiveness of heat dissipation than heat sinks with microcolumn pin fins. While other researches recommend the use of high conductive coating contains nano-particles. The present survey focuses on the researches about future heat sink with micro fin and the development to resolve the fundamental issues. The main benefits and boundaries of micro fins heat sink briefed.

A quasi-steady finite-volume model was developed for modeling a plain-finround-tube heat exchanger under frosted conditions. In this study, the heat and mass transfer characteristics of heat exchangers during frost formation process are analyzed numerically. Unsteady heat and mass transfer coefficients of the air side, heat transfer coefficient of the refrigerant side, frost layer thickness, the surface efficiency of the
heat exchanger and the mass flow rate of the frost accumulated on the heat exchanger surface are calculated. The total conductivity (UA) and pressure drop of the heat exchanger are reported for different air inlet and refrigerant temperature. Results have shown that frost layer growth is faster with lower inlet air temperature. Using the developed mathematical model, the algorithm and the computer code, which have
been experimentally validated, it is possible to predict a decrease of exchanged heat flux in the heat exchanger under frost growth conditions. The model could be further extended to simulate direct expansion evaporators with varying operating conditions and variable heat exchanger geometry.

The aim of this paper is to demonstrate the influence of butt welding shapes
on the corrosion rate, microstructure and temperature of carbon steel type
St37.The double butt welding was performed by V angles 15°,30° and 45°. The
finite element analysis via ANSYS software is performed, this analysis includes a
finite element model for the thermal welding simulation. The temperature
distribution was obtained. From the results of the microscopic structure it is
evident that the geometric shape has an important role in the welding process,
when the geometric value of the welding region gets bigger, the faults get less due
to increase of heat quantity in the welding region and the corrosion rate for the
rain water is less than of sea water. The work presents the finite element model for
numerical simulation of welding in carbon steel St37 double butt welding.

The aim of this paper is to demonstrate the influence of butt welding shapes on the microstructure, temperature and equivalent stresses of carbon steel type St- 37.The single butt welding was performed by V angles 15°,30°,45° and U shape. The finite element analysis via ANSYS software is performed , this analysis includes a finite element model for the thermal and mechanical welding simulation. The equivalent stresses and temperature distribution were obtained. From the results of the microscopic structure it is evident that the geometric shape
has an important role in the welding process, when the geometric value of the welding region gets bigger, the faults get less due to increase of heat quantity in the welding region. The work presents the finite element model for numerical simulation of welding stresses in carbon steel St-37 butt welding. The welding simulation was considered as a direct coupled thermo- mechanical analysi.s

Heat transfer from an immersed heating surface to a liquid-solid and liquid-liquidsolid fluidized beds have been studied. The experiments were carried out in a (0.22) m column diameter fitted with an axially mounted cylindrical heater heated electrically. The fluidizing medium was water as the continuous phase and kerosene as the dispersed phase. Low density (Ploymethyl-methacrylate) particles were used. Previous
published heat transfer correlations, obtained for fluidized beds containing highdensity particles, gave significant deviations compared with the present data. New correlations were developed to predict the heat transfer coefficients in liquid-solid and liquid-liquid-solid fluidized beds. The new correlation is,

The heat transfer coefficients obtained from the present work were compared with those estimated from other correlations reported in the literature. The comparison shows a good agreement with the data obtained for the gas-liquid-solid fluidized beds using low-density particles.