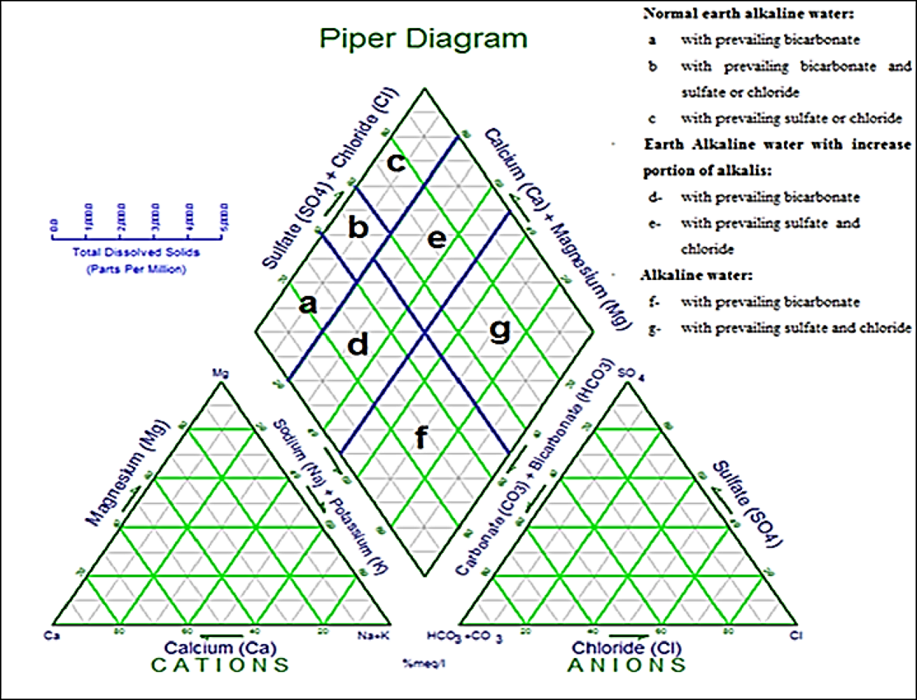 Groundwater in Yusufiyah  represents the main water source for drinking and irrigation purposes in the dry season, so this research was conducted to assess and evaluate the hydrochemistry of groundwater in this area. (15) wells were selected for sampling in this area with depth ranges between 10-20 meters. , Groundwater generally flows from east to west and from northeast to southwest.Physical parameters for water samples were measured included temperature, pH, electrical conductivity (EC), and total dissolved solids (TDS),where the chemical parameters included major cations (Ca+2, Mg+2, Na+2, and K+) and major anions (NO3-1, SO4-2,Cl-, and HCO3-).  The results indicated that groundwater in the study area isnot suitable for human drinking due to high concentrations in(CL=435 ppm), (SO4-2 =769 ppm), (HCO-3=280 ppm),(TDS=2375 ppm), and (EC=2899µc). These values exceeded the standard limits of  WHO. On the other hand, results show that this water was suitable for irrigation (good and Permissible except for well no.1,8,12,13, which wasnot suitable for all irrigation crops due to an increase in (SAR, Na) to the Don classification 1995.

Effect of Tigris River's Stage on the Groundwater Level

The research studies the effect of change of the Tigris  River's surface stage on groundwater movement by building a three-dimension model  using GMS model for a catchment area in Baghdad city. The model is built and calibrated by using the information of 16 wells for the year 2015 . Three scenarios of river elevation stage are used when the stage  elevation is maximum, average and minimum. The movement of groundwater according to the results was from the north-west to the Tigris River location. Also, the results show the velocity of groundwater in case of the minimum water surface level stage is greater than the other cases because of the high hydraulic gradient. The velocity of groundwater in layer one for all cases is very slow because of the low permeability.

The lack of reliable municipal water supply in the city of Port Harcourt has led to indiscriminate drilling of boreholes by the residents however, the direction of groundwater flow within the entire city has not been established. Hence, the research investigated the flow direction of groundwater in the study area in order to understand the best location for siting septic tanks and dumpsites with respect to the position of the existing or proposed borehole. This was achieved by determining the hydraulic heads (Hh) of twenty boreholes evenly distributed within the city by subtracting the static water level (SWL) from the corresponding earth surface elevation (E) with the use of a GPS and dipmeter. Results revealed that the hydraulic heads ranged from 0.14 – 23.16m while the surface elevation and static water level lies between 1.93 – 39.33m and 1.79 – 17.27m respectively. The contour map of the hydraulic heads indicated that the groundwater flows towards the southern and south-western directions hence, the residents were advised to take into cognizance when sitting dumpsites, landfills, and septic tanks with respect to proposed or existing boreholes.

The study area is located in the holy governorate of Karbala, Iraq; the research studied a predictive mathematical model of groundwater within Dibdiba Formation and by fifty (50) wells distributed randomly within the boundaries of the study area, all of them fall within the unconfined aquifer. Likewise, there is no component to direct the activity of these wells, where a mathematical model for the study area has been developed using the groundwater system modeling program (GMS v.10). The area was divided into a grid where the dimensions of a single cell ranged from 250m×250m. The model of the steady flow state was adjusted utilizing pressure driven conductivity extending from 9 to 15 m/day with a 0.15 storage coefficient to match the groundwater levels measured with the calculated groundwater table. The model was run for unsteady flow condition in the first scenario with fifty (50) wells and five (5) years. The drawdown in the groundwater tables ranged between (0.05-1.05) m. In the second scenario, the model was run after adding thirty-six (36) wells for five (5) years, groundwater limits 0.15-1.15 meters. The drawdown values are concentrated near wells sites, and the drawdown decline as we move away from the sites of these wells and this reflects the nature of the water reservoir located in the study area, which is characterized by high production where compensation resulting from the operation of the wells decline rapidly by the reservoir. Therefore, the values of the drawdown in elevations appeared very low. The study also showed the possibility of drilling additional wells in this area depending on this model to benefit from them in the future for different uses

Nitrate contamination is worldwide water pollution posing a major
health hazard to human and animal life. Challenges are being faced to get fresh
water for the areas having a low amount of usable water. This study aims to
asses and evaluates the feasibility of removing nitrate from groundwater by
using cheap approaches. A pilot-scale solar distillation membrane filter, was
designed and constructed for this study, the set up was designed into two
partitions: i) water heater and ii) membrane distillation. The effect of several
operating parameters such as feed and distillate temperature, nitrate
concentration, and pH, on water flux and nitrate removal efficiency, was
investigated. The results showed that 85 and 93 percent removal efficiencies for
nitrate and total dissolved solids, respectively. The effect of important
parameters of solar performance membrane filter distillation (SPMFD) process
including solar collector efficiency (𝜂𝑐
), gained output ratio (GOR) and
significant operating parameters containing feed and condensate temperature,
feed nitrate concentration and pH were studied in this work and it could be
concluded that water flux was increased exponentially with increasing feed
temperature, and under the same operating conditions, average water flux
changed from 9.52 to 34 kg/m2 per hour when temperature increased from 60
to 90 °C gradually. However, no significant effect was found by varying nitrate
and TDS concentration and pH on water flux. It can be concluded that
membrane distillation and solar desalination processes could be the efficient
methodologies to exploit in the large nitrate-affected rural areas of Iraq and its
surrounding with abundant sunlight, particularly during the critical dry season