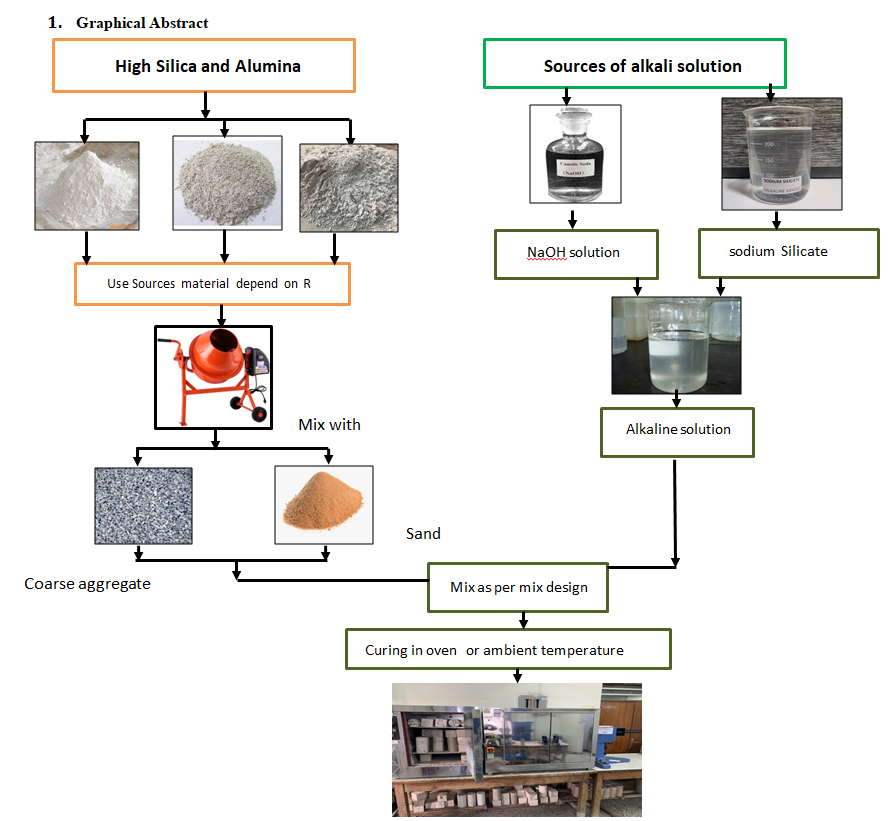 One of the most user-friendly alternatives to ordinary concrete is geopolymer concrete(GPC), which achieves the same result. GPC is a unique substance made by activating source materials with a high concentration of silica and alumina. As a result, geopolymer binders use less raw resources and emit less carbon dioxide. For these reasons, most academics are focusing on these sorts of resins to develop eco-friendly housing. This article reports on an experimental investigation that examined the Mechanical Performance of Blended Fly Ash based Geopolymer concrete at 7,28 and 360 days made with two different activator solution molarities and varying R (SiO2/Al2O3) ratios. Positive findings were seen at a larger percentage of GGBS (36%) with a concentration of a sodium hydroxide solution of 10 M and an R ratio of 2.75, compared with other proportions. The test findings indicate that increasing the concentration of sodium hydroxide (NaOH) solution and R enhances the compressive strength and decreases water absorption of geopolymer concrete.

Self-compacting geopolymer concrete (SCGPC) is a cutting-edge sustainable engineering material in construction that eliminates the need for both compaction and Portland cement. In this study, the impact of various steel fiber content on the workability of SCGPC was investigated. The basic workability features of freshly made SCGPC, such as filling ability, passing ability, and segregation resistance, were assessed by employing slump flow, V-funnel, L-box, and J-ring test techniques. Obtained results showed that all the investigated characteristics of SCGPC have retreated due to the inclusion of steel fibers. Findings presented in this research confirmed that the basic requirements of EFNARC could only be satisfied when Vf ≤ 1.0%.

Ultra-High Performance Concrete (UHPC) is a new generation of concrete characterized by its high strength, high durability, and high stiffness. Autogenously shrinkage represents one of the issues of UHPC that occurred at early ages. It occurs particularly during the first 48 hours after casting. This paper focuses on the ways that can be depended on to mitigate the autogenously shrinkage and obtain the outstanding mechanical properties of UHPC. The results showed that the use of coarse sand and high dose of high range water reduced the admixture above 5% of cementations of materials weight, and high ambient temperature at the time of mixing and casting led to increasing the autogenously shrinkage. While using fine sand, silica fume at 25% of cement weight, and crushed ice at 50% of mixing water to control the mixing temperature can reduce autogenously shrinkage significantly.

This paper investigates the impact of the fly Ash addition on the Geotechnical properties of soft soil as well as chooses the optimum percentage added of fly ash. To understand the behavior of fly ash mixed with soil, a number of laboratory experiments testing conducted on clayey soil-fly ash mixture in several percentages (5,10,15,20,25, and 30%) as Atterberg test, Specific gravity test, compaction test, California Bearing Ratio (C.B.R) Test, Unconfined Compressive Strength (UCS) Test, Consolidation Test. Test results indicate rising in plastic limit and liquid limit as fly ash adding. Specific gravity decreased essentially by adding fly ash. Whereas there was falling on the Dry unit weight value with the contract to the decreasing in the water content. The CBR and UCS values were increased with increasing fly ash content. 20% was the optimum fly Ash content. This study also benefits the effective use of fly ash and thus a cost-effective method for improving the soil properties.

One of the main challenges facing Civil Engineering community is to modify cement quantity in the mix design by admixtures to enhance the mechanical properties. According to more than 1000 data from literature, mechanical characteristics of concrete modified with FA were discussed. The statistical variation with modeling were achieved by set of data. The cement was replaced up to 70% with FA (weight of dry cement) and by cube of concrete testing up to 90 days of curing time and different w/c ratio. The compressive strength of concrete varied from 18-67 MPa, while, for modified concrete with FA, compressive strength ranged from 21-94 MPa, tensile strength ranged from 1-9 MPa and flexural strengths ranged from 3 - 10 MPa. The w/c ratio of concrete modified with FA varied from 0.24-0.53, also the FA content varied from 0-50 %. Vipulanandan correlation model was effective by connecting mechanical properties and compare with Hoek-Brown model. The nonlinear model was used to investigate the effect of FA on properties of normal and high strength concrete. Study results presented a worthy correlation between compressive strength and curing time, w/c ratio and FA content. By using the interactive linked (model) for compressive, tensile, and flexural strengths of concrete quantified well as a function of w/c ratio, curing time and FA content by using a nonlinear relationship.

The main objective of this research was studying the effects of using multi types of mineral admixtures as high reactivity Attapulgite (HRA), high reactivity Metakaolin (HRM) and fly ash (FA) on some rheological and mechanical properties of lightweight self - Compacting concrete (LWSCC), when were used as a partially replacement by weight of cement. The results showed that using of (HRA) and (HRM) increased the superplasticizer (SP) dosage, while (FA) with spherical particles reduced the (SP) dosage relative to reference mix (Ref. mix) to get the same slump flow target value. The optimum content for (HRA) used in this study was 10 %, and the percentages of increment in compressive strength and splitting tensile strength relative to (Ref.mix) were (10.0%, 12.2%, 11.15% and 12.3%) and ( 8.8%, 17.46%, 16.34% and 14.66%) for 7, 28, 56 and 90 days respectively. Using of (FA) reduced early age strength, but long term strength increased with (FA) content increases. LWSCC mix contained 10% (HRM) showed a better mechanical properties than both (HRA) and (FA) LWSCC mixes, and the percentages of increment when cement was replaced with 10 % (HRM) relative to (Ref.mix) were (15.0%, 17.6%, 13.9% and 15.7%) and (16.0%, 24.2%, 22.2% and 21.6%) at 7, 28, 56, and 90 days for compressive strength and splitting tensile strength respectively.

Performance of Geopolymer Concrete Exposed to Freezing and Thawing Cycles

In this study, the effect of rapid freezing and thawing (ASTM C666 – procedure A) on three different types of Geopolymer concrete studied using three types of pozzolanic material: fly ash, metakaolin and ground granulated blast furnace slag (GGBFS). The Geopolymer concrete was prepared using 400 kg of the pozzolanic material with alkaline liquid prepared at 8 molar concentration with normal fine and coarse aggregates. The ratio of alkaline to fly ash and GGBFS was 1.5: 1 and for metakaolin was 2: 1 for workability and compressive strength requirements. Specimens (100 × 100 × 400) mm were exposed to 100, 200 and 300 cycles of freezing and thawing. The decrease in measured compressive strength was (23, 43, and 26%) for Fly ash, metakaolin and GGBFS respectively. The investigated types of concrete showed good resistance to freezing and thawing. The durability factor of these types was (77%, 68%, and 81%) for fly ash, metakaolin, and GGBFS respectively.

This research studied the effect of adding fly ash and boron carbide (B4C) particulates reinforcement on the mechanical properties and wear resistance of Al- 4.5% Cu- 1.18% Mg matrix alloy. Stir casting method has been used to fabricate the alloy and hybrid composite samples containing 2wt% of B4C and 5, 10, 15،20 wt % fly ash. The x-ray inspection revealed the dispersion of intermetallic compounds (Al2Cu,MgO and SiO2) Also, the mechanical properties have been evaluated, the results showed an increase in the tensile and yield properties with the increase of weight percentage of fly ash content up to 15 wt%, but the elongation decreased, while the hardness increased. Wear rate examination has been concluded by using pin on disc apparatus under different loads of (5, 10, 15) N, sliding velocities (1.413, 2.827, 4.241) mm/sec, and different times of (5, 10, 15) min. The results showed decrease in wear rate at 20% fly ash composite sample when compared with other composites samples and base alloy.

The current paper deals with the preparation of bars with a length of about 13 cm and 2.5 cm diameter from MMC materials. These composites consists of cast (Al-Si-Mg) as a matrix that reinforced with fly ash (0.454 ìm) or fly dust (0.620 ìm) in relative weights (2, 4, 6, and 8%) respectively. Both of composite materials samples were manufactured
by casting method (Vortex method). Vortex method has been used successfully to obtain a homogeneous distribution of reinforcement particles. Samples were classified into two categories according to the type of reinforcement particles. The results showed that the
wear rate of the samples depends heavily on the working conditions. Which increases with increased load and download time.The results also showed superiority aluminum alloy reinforced fly ash compared with the aluminum alloy reinforced with dust flying. Furthermore, a significant increase in the hardness and wear resistance for all samples
prepared with increasing added particles for the purpose of reinforcement.

The paper examines the properties of five different types of repair and substrate
materials, including conventional mortar, fly ash mortar, silica fume mortar, conventional
concrete substrate, and high-performance concrete substrate materials. Assessment was
carried out on the basis of some physical properties (total porosity, and electrical resistivity).
These properties were measured at early age and later after 14 weeks of exposure conditions
to 6 % (by weight) of sodium chloride solution to simulate typical marine environment.
The results show that the electrical resistivity and total porosity measurements appear
to be related and the measurements obtained are affected by the pore structure of the
materials. It is also expresses that if a material has grater proportion of coarse aggregates (e.g.
the substrate concrete in this study) it will appear to have a lower porosity although the
porosity of mortar surrounding the aggregates could be higher. This makes comparisons
between materials containing different aggregates proportions and size difficult.