Applications of Helical Versus Straight Hollow Fiber Membranes: A Review 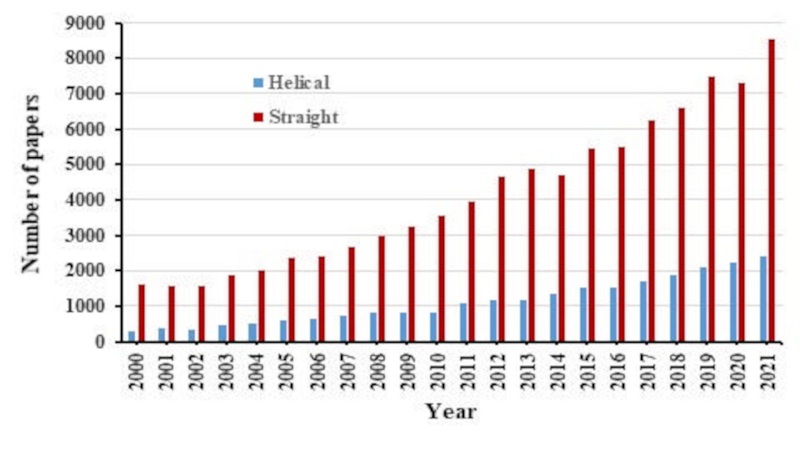 The production of straight and helical hollow fibers plays an important role in developing hollow fiber membrane technology that encompasses a broad range of designs. During the last two decades, scientific studies devoted to straight hollow fibers were more abundant than those focused on helical fibers. Several major applications considering side-by-side testing of these two geometries are discussed in this review. For membrane extraction, desalination, and membrane contactor processes, it is observed that permeability rates are 10%-400 % higher for helical fibers compared to straight fibers. This outcome is justified by the presence of Dean-vortices-induced flow turbulences inherent to the geometry of helical membranes. These conditions give rise to an uptake of mass and heat transfer coefficients and a reduction of temperature and concentration polarization phenomena.  Aside from enhanced flow properties, helical hollow fiber bundles tend to be more robust by design, thus exhibiting better resiliency over long service operations than straight bundles. One persistent shortcoming of the helical fibers seems to be an increase in pressure drop. However, this does not always translate into a higher energy consumption – i.e., versus straight bundles. Given the performance advantage, product robustness, and adaptiveness to a broad range of applications, the adoption of helical hollow fiber technology deserves growing support from the membrane community in academic and industrial settings.

Over the recent years, the emphasis on sewerage has increasingly
switched from provision of new services to maintenance of existing service at
acceptable levels. As a consequence the need is now to rehabilitate existing
systems rather than construct new ones.
The common methods of rehabilitation consist lining of the sewer pipes
and that was out of the question since it decreases the diameters of the already
under size sewer lines.
So that, hence, it was concluded that the best method for rehabilitating the
existing system was by total replacement of the undersize sewer lines. This should
be done using sewer pipes with better quality material, such as PVC, GRP or first
class concrete pipes.
Modern water and wastewater pipe is either organic or inorganic in
composition. Today's organic pipe is made of petroleum-derived plastic, which
contains preservatives, antioxidants, and stabilizers to slow down the gradual loss
in strength that occurs with organic materials[1].
So that redesigned the existing sewer system in AL-Karadda district
within the city of Baghdad by computer with the use of QBasic language. The
design consist concrete pipes in once and plastic pipes in other to find the best.
Based on the results, it was concluded that the plastic pipes needed
gradient (Smin) less than concrete pipes (0.004 m/m for plastic, 0.005m/m for
concrete), the max. soil cover for plastic pipes was equal to (3.59 m) while for
concrete pipes it was equal to (4.25m).In addition the network redesigned on the
min. commercial concrete pipe diameter equal to (200mm) while for plastic pipes
equal to (250mm) and that will increasing the capacity of the network.