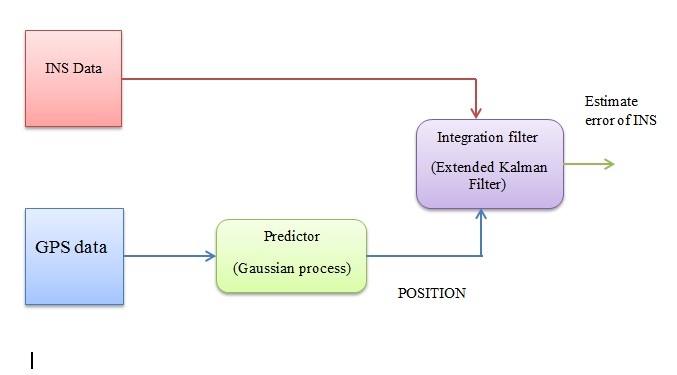 Global Positioning System (GPS) has become important and necessary in daily life.  It is possible to reach any destination using GPS, which is included in many lands and marine applications.  In this work, GPS was applied to a real navigation boat, integrated with the inertial navigation system (INS) device, and installed on the boat. The navigational devices were linked to the (mission planer) program, through which the results of the navigation process were shown. The system can provide better navigation performance accuracy and reliability due to the integration between GPS and INS. The data extracted from the navigation devices are processed using the Gaussian process (GP) prediction algorithm, to perform the GPS synchronization with the INS and predict the GPS cut-off values for specified periods. The prediction results of the GP algorithm are effective for the cut-off GPS data as the apparent error amount of the algorithm is low. In addition the inertial navigation system provides the location, speed, and position of the boat, but it contains a cumulative error that increases over time. On the other hand, the GPS better accuracy with a lower data rate than  the INS, so the integration system between INS/GPS is necessary. It must be developed to overcome the negatives in both systems. Two types of integration were introduced and implemented herein: loosely and tightly. From the results obtained, one can see that the tight system is better at improving errors. 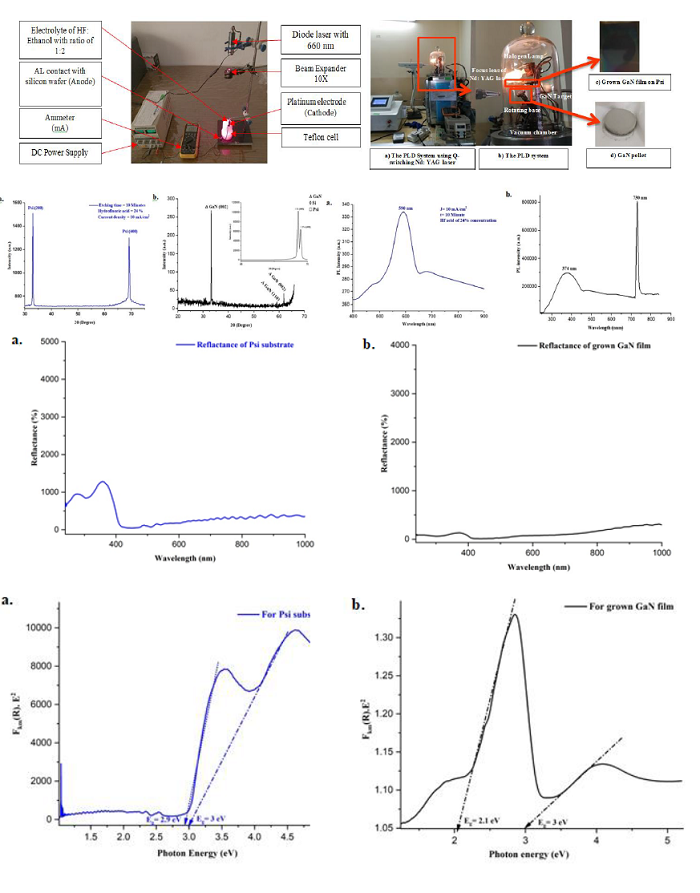 The optical properties of a grown gallium nitride (GaN) thin film on a porous silicon (P-Si) substrate was investigated. A Photo-electrochemical etching method was used to synthesize the Psi substrate, and a physical deposition method (pulsed laser deposition) of 1064 nm Q-switch Nd: YAG laser with a vacuum of 10−2 mbar was used to grow a thin layer of GaN on a prepared P-Si substrate. X-Ray diffraction displayed that GaN film has a high crystalline nature at the (002) plane. The photoluminescence of GaN film exhibited ultraviolet PL with a peak wavelength of 374 nm corresponding to GaN material and red PL with a peak wavelength of 730 nm corresponding to Psi substrate. The absorption coefficient of the P-Si substrate and grown GaN thin film was obtained from the absorption calculation of UV-Vis diffused spectroscopy at ambient temperature in the 230–1100 nm wavelength range. Extinction coefficients, optical energy gap, and refractive index of both the P-Si substrate and the grown GaN thin film have been determined, respectively. The direct optical energy gaps of both the P-Si substrate and grown GaN have also been determined using three methods: Plank’s relation with photoluminescence (PL) spectroscopy, Tauc'relation, and Kubulka-Munk argument with Uv-Vis diffused spectroscopy. It was observed that the optical energy gap of the P-Si substrate was 2.1 eV, while the grown GaN thin film had a multi-optical energy gap of 3.3 eV and 1.6 eV. A good agreement has been obtained between these mentioned methods.

Reliability Assessment Based on Optimal DGs Planning in the Distribution Systems 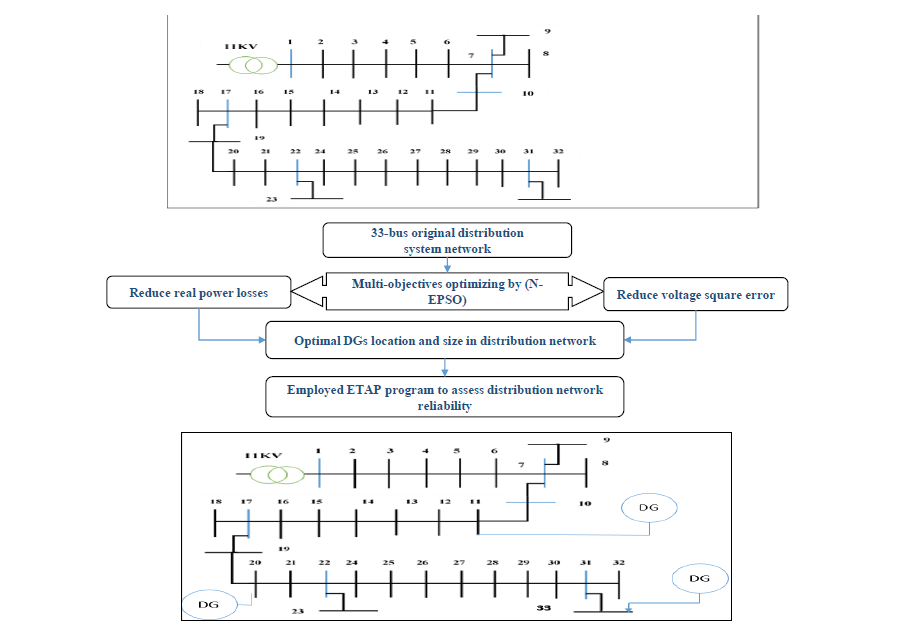 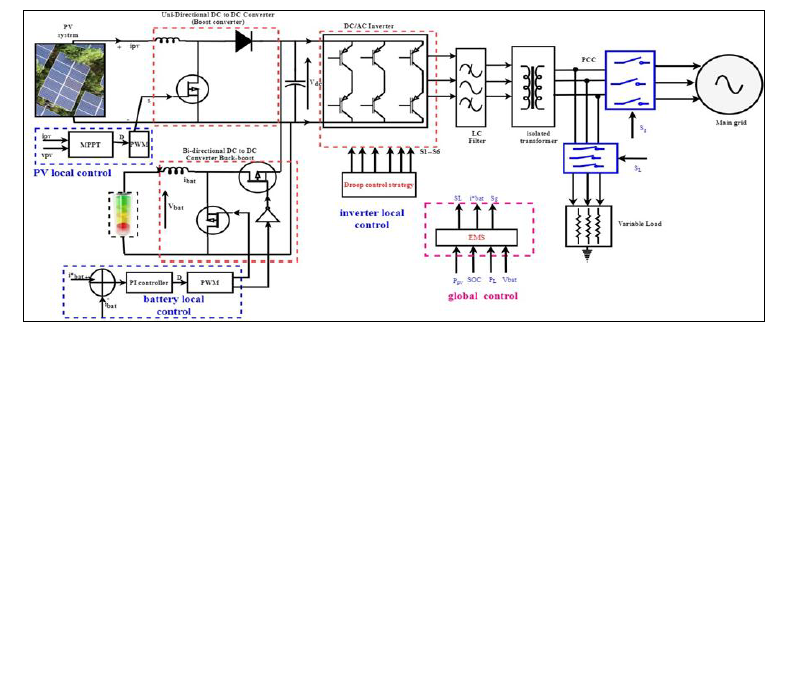 This work presents an Energy Management System (EMS) constructed on dissimilar power balance modes and dynamic grid power to activate a DC-link microgrid with a solar (PV-array) generator and battery storage. In addition, the option of requesting adjustable power from the grid to encounter load demand is also presented.  Based on the availability of solar sources, battery state, and grid power, energy management offers the appropriate references for all modes. Six power balance options are defined based on power supply, storage system, and grid mobility to match the load requirement. The aims are to reduce energy usage and upsurge the life of the storage device. The microgrid is controlled to maintain a consistent DC-link voltage and manage the battery current depending on the mode of operation. Using MATLAB\SIMULINK software, the anticipated energy management system, which is based on power balancing modes, is tested under various scenarios. The simulation results demonstrated that the microgrid operated admirably, with seamless switching between power balance modes.

The performance of antennas is critical to ensuring reliable wireless communication and robust data transmission. Unfortunately, antennas’ performance gets degraded when loaded with lossy materials. This paper presents the numerical and experimental evaluation of low-profile antennas’ performance when integrated with photovoltaic (PV) solar cells for potential use in smart grid and green power networks. Such integrated antennas can serve as a communication unit and sensors to monitor PV solar cells. For convenience, a microstrip patch antenna was used in this assessment study, where the antenna was designed, numerically simulated, and experimentally tested. After which, it was installed on top of a PV solar cell at different orientations. The antenna is designed to operate within the 2.45 GHz ISM band. Based on the results, the antenna performed well when placed at the middle of the PV solar cell with a peak gain of 2.58 dBi compared to other placements within the PV solar cell. Moreover, creating a small air gap between the antenna and the PV solar cell results in better performance. Based on the findings of this study, the antenna has satisfactory performance when integrated with PV cells, which is promising to deploy in many applications, including smart grid networks. 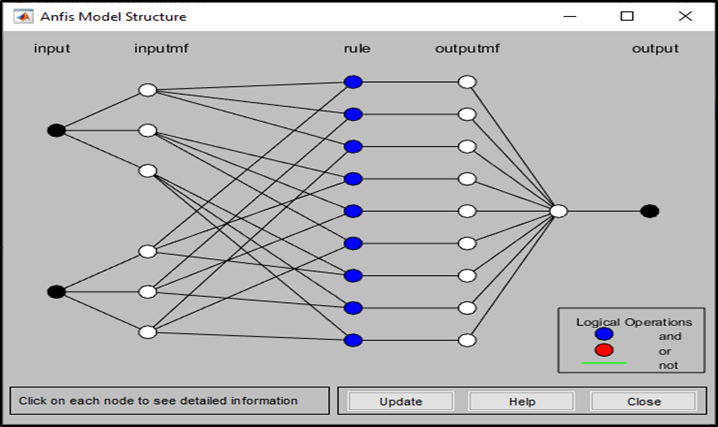 Inductance – Capacitance – Inductance (LCL) filter is a very attractive candidate for renewable energy system applications due to its high efficiency. High attenuation of the switching frequency harmonics, small size, low fee, and improving the overall harmonic distortion (THD). This paper presents how voltage is affected by increased loads or voltage sag. Therefore it is necessary to control it with certain controllers. The Adaptive Neuro-Fuzzy Inference System (ANFIS) is used as an intelligent controller, the voltage constraint as training data for ANFIS obtained from PI. The filter works in a good connection between the inverter and the grid and rewords unwanted harmonics from using the inverter. The mathematical models for the LCL filter are investigated. The proposed approach shows more effective results than previous performance for voltage controlling and harmonic reduction. It gives overshoot (0.5%), steady state error (0.005), settling time (0.03 sec), rise time  (0.005 sec), and improving THD 8.67% to 2.33%  by comparing these results of ANFIS respectively with the results of PI which gave(3%),(0.01),(0.2sec)and( 0.02sec). 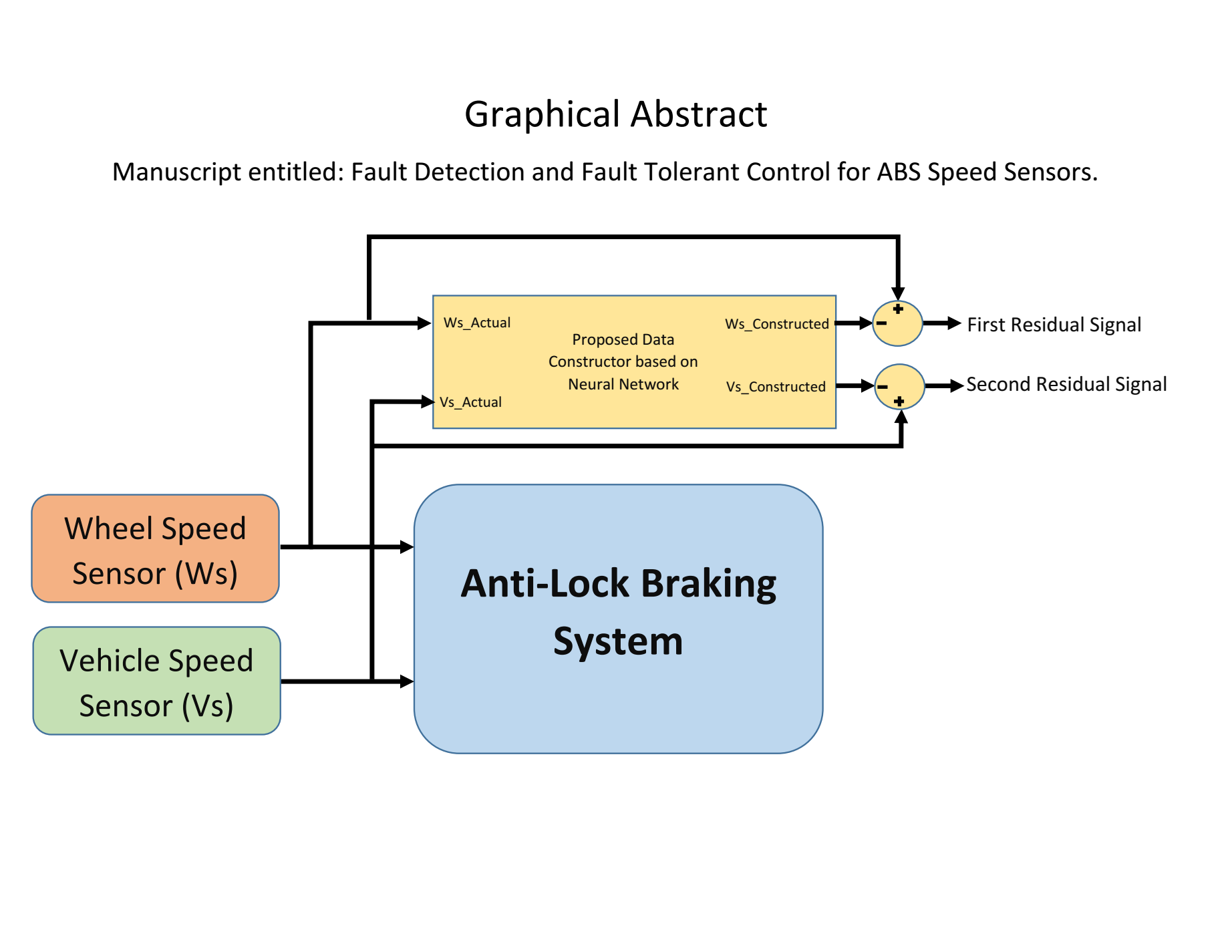 This paper proposed neural networks to continuously provide alternative constructed signals for vehicle and wheel speed sensors utilized for the Anti-Lock Braking System (ABS), which serves as the fault tolerant control method. These alternative constructed signals are used for two purposes. The first is to generate residual signals, and the second is to be adopted instead of isolated faulty signals. The residual signal is generated by extracting the difference between the alternative constructed signals and the corresponding actual signals. These residual signals serve as an indication of fault occurrence and to express that fault severity. Whenever a fault occurrence is detected and diagnosed in one of the sensor’s signals, the faulty signal is isolated and replaced by the corresponding constructed signal to maintain the system's normal behavior under a faulty condition. The range of data covered under the proposed estimating neural networks is huge, continuous in time, and not sampled. In this work, the range of the data lies between [50 to 120 km/h] when the braking is started. That cannot be performed by any available method. These models' training process is based on the Levenberg-Marquardt (LM) algorithm, implemented and tested by MATLAB/Simulink. The results show that these models can accurately map the measured data into the desired output through the best-fit functions. The fast response of the trained models makes them suitable for real-time alternative signals for fault-tolerant purposes for speed sensors during hard or panic braking. 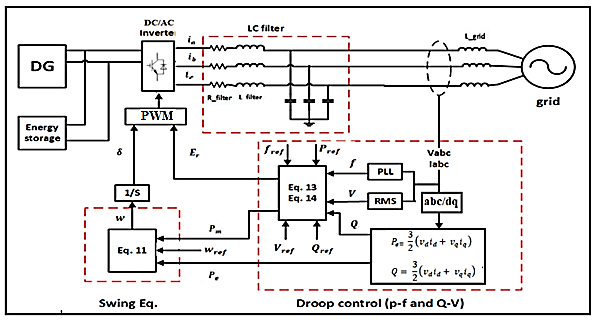 Renewable energy sources (RESs), such as solar and wind power, offer new technologies for meeting the world's energy requirements. The distributed generator (DG) based on RESs has no rotational mass and damping effects compared to the traditional power system with synchronous generators (SG). However, the increasing penetration level of DG based on RESs causes low inertia, a dampening effect on the dynamic performance of the grid, and stability. A solution to improve the frequency stability of such a system is to provide virtual inertia by using virtual synchronous generators (VSG), which can be created by using short-term energy storage and a power inverter, and a suitable control mechanism. The VSG control mimics the dynamics of the rotation SG and enhances the power system's stability. This paper presents an overview of various topologies on virtual inertia, VSG concepts, control techniques, and VSG applications. Finally, the VSG challenges and future research will be discussed. 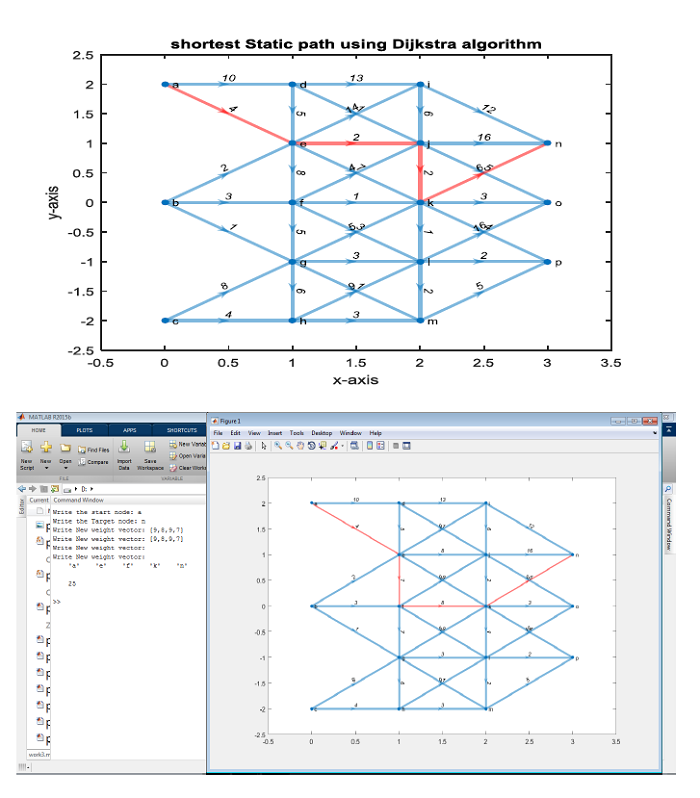 It is possible to represent the road map on the paper and study it using Dijkstra`s algorithm to find the shortest path on the real earth. Dijkstra`s Algorithms are used for calculating the shortest path from source to sink to enable query operations that follow. Dynamic shortest-route techniques are needed to accommodate the modifications within the underlying community topology. Every solution includes figuring out the nodes whose shortest routes could be impacted through the updates and producing a list of affected vertices and their updated shortest pathways. In this work, the advent of the retroactive priority queue information structure makes the Dijkstra algorithm dynamic. In this research, the stepping is changed forward in the shortest direction for 2 networks and two directions. That changed by locating the shortest static path, then circulating to the first node after the beginning node. At this node, the weights inside the segments directed from this node will exchange and cancel the vintage shortest direction and locate the new direction. Then flow to the next node in the new find shortest path, and repeat the operation until the end.  The idea is that the best path can be constantly changed based on the latest data. These continuous changes are addressed in this paper, where the proposed system can find the best methods and update them automatically according to the variables.
Journal Information