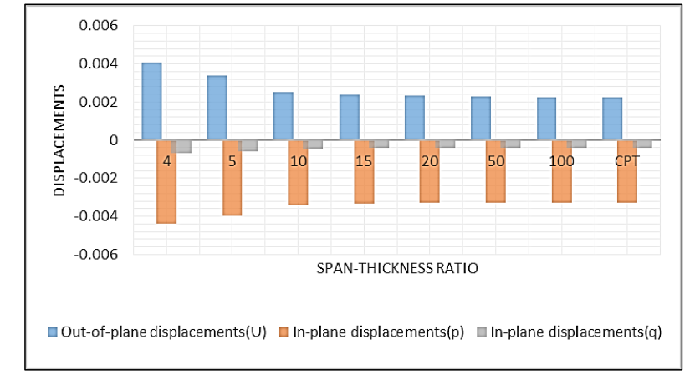 An exact solution for the bending attributes of a thick rectangular plate under transverse loading is modeled herein using three-dimensional (3-D) elasticity plate theory and fourth-order polynomial shear deformation function. Precluding coefficients of shear correction, this model captured the effect of shear deformation along with the transverse normal strain stress. The expression for total potential energy was derived from a 3-D kinematic and constitutive relation the equilibrium equation was developed and employed from the energy functional transformation to get the relationship between slope and deflection. Exact polynomial functions were obtained from the outcome of the equilibrium equation and with the aid of the direct variation approach, the coefficient of deflection of the plate was generated from the governing equation. The expression for computing the displacement, bending moments, and stress components along the three axes of the plate was established from these solutions for the assessment of the bending characteristics of a rectangular plate. The result of a simply supported at one edge, free at one edge and clamped at the two outer edges (SCFC) was evaluated using the obtained functions in this study. The report of this study confirms the exactness and consistency of the 3-D model unlike the refined plate theories applied by previous authors in the available literature. The value of 8.05% is the comprehensive average percentage variation of the values for center deflection obtained by Onyeka and Okeke (2020) and Gwarah (2019). It is established that at the 92 % confidence level, this model is worthy of adoption for safe, cost-effective and accurate bending analysis of thick plates of any support condition.

Reinforced concrete beams are the most generally used structural parts in building, bridges, and many other structures. In the past two decades, many investigations have been conducted using various fiber-reinforced polymer (FRP) material types /steel bars to reinforce concrete beams under flexural test. The purpose of this paper is to review the flexural performance of concrete beams reinforced with hybrid FRP and steel bars to better understand their behavior. The main parameters addressed by researchers were dimensions of beams, FRP bar material type, and hybrid reinforcement ratio. The researchers established that the use of the combination between steel and FRP reinforcement bars improves the performance of the concrete beams. Moreover, the studies showed that the ductility of the hybrid reinforced beams increased compared to that of conventional steel reinforced beams, however, it decreased when the ratio of (Af/As) increased. The application of using hybrid FRP/steel bars in reinforcing concrete beams will further increase upon utilizing techniques for reducing the brittleness and higher cost of FRP bars. The general structure of this paper consists of presenting the formulas offered by ACI 440.1R-15 building code relating to the flexural strength calculation of concrete beams reinforced with FRP/steel bars. The paper also details some of the current experimental tests and analytical works published for concrete beams reinforced with hybrid system, and outlines research directions and identifies gaps required for additional research.

This scientific research was carried out within the framework of contributing to the recovery different of natures of waste, and making it possible to minimize using of natural aggregates in the field of construction, in order to place an eco-self-consolidating concrete (eco-SCC). Crushed demolition waste mainly of concrete had been studied as a substitute for natural sand. As well as the effect of replacing fines with crushed eggshell waste was assessed. So this present work fits in these contexts. Therefore the main objective of this study is to improve current knowledge on the behavior of studied concretes in the fresh state: slump-flow test, and hardened state: mechanical resistances in compression and in bending, as well as water absorption by capillarity test, absorption by total immersion, and porosity accessible to the water of SCCs designed from different types of waste, recycled sand, and eggshell fines. Also, the method of assessing mixes were affected by the sort of chemical attack, namely the (NaCl) attack was investigated. In light of the obtained results, it was found that the addition of eggshell fines in adequate quantity, can improve the properties of SCCs, in this study a volume of 30% was sufficient, increasing the volume added to 60% introduced an opposite effect. Using recycled sand in this study did not contribute to a significant effect on the mechanical properties of the mixtures studied, although an improvement in workability was observed. 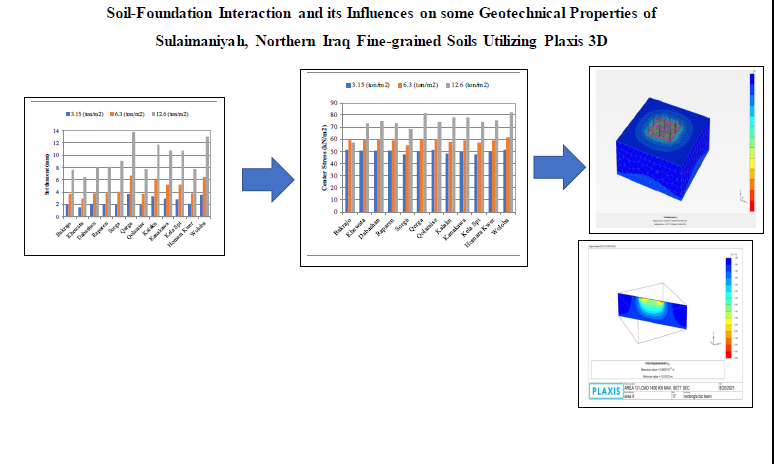 Foundations of various construction projects usually can be either shallow or deep foundations. A mat foundation is one of the common shallow foundations typically utilized for various types of buildings. Foundations construct on various types of soils, which might be essential to understand the interaction scenario between them as they are two different types of materials. This study aims to discover the characteristics of the soil-foundation interaction for the suitable areas for the resettlement process in focus on a certain foundation type with a dimension of 10m x 10m x 0.5m, applied on twelve areas rich with fine-grained soil types in Sulaimaniyah governorate, northern Iraq, which suffer from some geotechnical problems such as building cracks. Application of loads was conducted in three stages; 35 tons, 70 tons, and 140 tons were directly applied on the utilized soils. The obtained results of the study prove that the 3D Plaxis is quite capable to predict the settlement of each foundation modeled on each utilized soil type. In addition, the modeling work achieved that the utilized foundation center stresses are notably smaller than the obtained foundation corner stresses. The obtained soil settlement values are not dependent on the soil-bearing capacity.
Journal Information